Haven’t we all wondered what life would be like with a dose of magic? Inspired by Erika Lewis’s upcoming debut fantasy series, Kelcie Murphy and the Academy for the Unbreakable Arts—on sale March 1st—here’s a list of recommended books featuring magical schools and secret societies (some more wish-fulfilling than others). 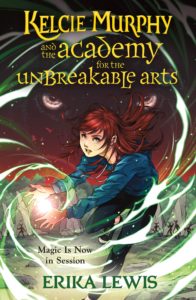 The Otherworld is at war. The Academy for the Unbreakable Arts trains warriors. And Kelcie Murphy—a foster child raised in the human world—is dying to attend. When Kelcie tests into the school, she learns that she is a Saiga, one of the most ancient beings in the Otherworld. Secretive, shunned, and possessed of imposing elemental powers, the Saiga are also kin to the Otherworld’s most infamous traitor. But Kelcie is a survivor and a place at AUA means learning to fight with a sword, harnessing her hidden powers and—most importantly—finding out who her parents are, and why they abandoned her in Boston Harbor eight years ago. Alcatraz vs the Evil Librarians by Brandon Sanderson

On his thirteenth birthday, foster child Alcatraz Smedry gets a bag of sand in the mail – his only inheritance from his father and mother. He soon learns that this is no ordinary bag of sand. It is quickly stolen by the cult of evil Librarians who are taking over the world by spreading misinformation and suppressing truth. Alcatraz must stop them, using the only weapon he has: an incredible talent for breaking things. The School for Good and Evil by by Soman Chainani

Sophie is destined to join the School for Good, with her glass slippers and dedication to good deeds; the same school that shaped the path of past students like Cinderella, Rapunzel, and Snow White. Meanwhile, Agatha is no doubt a perfect fit for the villainous School for Evil. But somehow, their fortunes are reversed. Sophie finds herself at the School for Evil to take Death Curses and Henchmen Training, while Agatha is in the School for Good, learning etiquette from princesses and taking Animal Communication classes. But the girls soon learn that maybe what they thought was a mistake was actually the first clue in discovering who they really are. The Nevermoor series by Jessica Townsend

Morrigan Crow is cursed. Born on Eventide—the unluckiest day for any child to be born—she’s blamed for all local mishaps. Even worse, the curse means that she’s expected to die on the evening of her eleventh birthday. But when her birthday arrives, she’s suddenly whisked away to the magical city of Nevermoor, by a peculiar yet incredible man named Jupiter North. Jupiter has chosen Morrigan to contend for a spot in the city’s most prestigious organization, the Wundrous Society. To make it into the society, she must compete in four dangerous trials against hundreds of other children, each with extraordinary talent—talent that Morrigan thinks she doesn’t possess. The Heroes of Olympus series by Rick Riordan

Demi-gods, prophecies, and unbelievable quests abound in Rick Riordan’s best selling Heroes of Olympus series. Book one, The Lost Hero, kicks off this fantasy series by introducing Jason, Piper, and Leo—three students of the Wilderness School, a boarding school for “bad kids.” When a freak storm occurs, and strange creatures attack during a school field trip, the three friends suddenly find themselves at Camp Half-Blood, a Greek demigod training facility. Students at Camp Half-Blood trade their math and social studies courses for weapons training, myth-crafting, storytelling and more—with the goal of releasing the hero inside them.